Ok first- an admission. I cheated on the media fast I was doing and checked my email. But only a couple times, and only once per day when I did check it (ahem, I have checked my email at least a dozen times today, by compassion. So much for killing THAT habit).  I did NOT want to come back to thousands (and thousands) of junk emails. I did at least leave my phone off though!
Even if I had wanted to check my email more, it would have been difficult- even when I was in a place that actually had reception (and I was in a couple places where there was no reception for even radio due to high walls). My kindle works in a pinch for checking email (but not for replying, the typing is too slow). It actually worked a LOT better than my mom's phone, so much so that she also used her Kindle to check her email. Near the end of the 3 weeks I was actually finally near internet again- but most of it was so horribly slow I it was a huge pain to do anything (exception being yacht club outstation docks).
Will I be doing it again? Only if I am on vacation (and clearly I can't even manage that, ha!). I would like to get down to checking email only once a day. Eventually (not possible just yet due to time sensitive projects unrelated to yarn!). 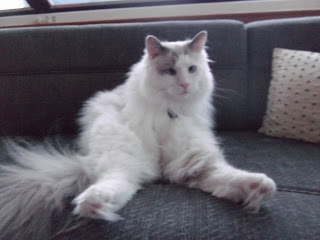 Ok. Ya got me. I wasn't just on a media fast- I was on vacation. On the boat. That above is Max, btw. He (and his cohort Snip) are Ragdolls like Wendy's cat.  More specifically, we went from Seattle up to Canada for 3 weeks, most to areas around Desolation Sound.  My parent's cats came with. My cat stayed home since he doesn't like their cats... or loud motors.

We had a lot of fun- I got way more reading done that I did knitting though, probably because I perfected my knitting-and-reading-at-the-same-time technique.

More on the boat trip, what I knit, and what knitting stuff I travel with later! I didn't bring my wheel this year, just lots of yarn! 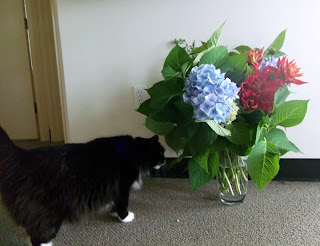 After being gone for 3 weeks my cat was super happy I was back- despite having an awesome pet sitter.  He was surprisingly uninterested in my bags, and was far more interested in the flowers from my mom's garden. He also was really impressed by the peas I picked. 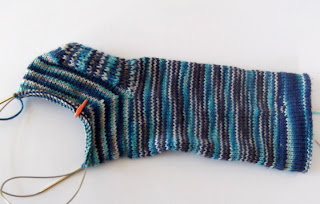 My "walking around" socks. I prefer to knit on dpns, but use a single circ when there is the risk of dropping needles in to the water!  This is yarn from Sweet Georgia, which is dyed in Canada.  Only halfway through the first sock since I started them just a couple days before coming home. I am making them just as I normally do for basic socks- 60 sts, size 0 (or 00 in this case since I am on a circ- I have to go up to ) when I use dpns since I break or bend the smaller ones too easily when I travel). Yea I knit loose, I know!

Whoops, you can see a mistake in the double knit cuff- I pulled the yarn to the front instead of back to start the round, and didn't notice it until I was knitting the heel. Loving the double knit cuff/hem- a nice change from ribbing, and top down means I just start it on the cast on, so no worrying about a neat bind off. 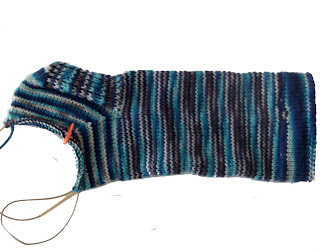 I am a little surprised it isn't pooling more- which is fine by me! I don't mind pooling, but I like it when it is at least sorta striped. 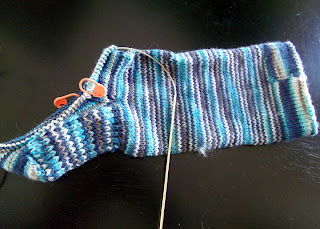 I don't use stitch markers when I knit socks on dpns,  but often do when I knit on a circ- but just for the heel.
Email ThisBlogThis!Share to TwitterShare to FacebookShare to Pinterest

Welcome back! Your vacation sounds very relaxing!
I'd love to knit and read for a few weeks. Cute socks too (I also knit loosely, it's a pain trying to match gauge)