It is a slow Monday here. Still waiting for my website to be fixed- currently it won't let people log in from IE, but works for other browsers (chrome and FF). In the meantime, I am spinning fun yarn, dyeing my hands yellow on accident- by far the worst color to accidentally dyed them! Plotting ways to not have to go to the post office so often. Listening to A House of Tailors

(which I think is kid appropriate- the audio has a pretty good reader so far) and This American Life. 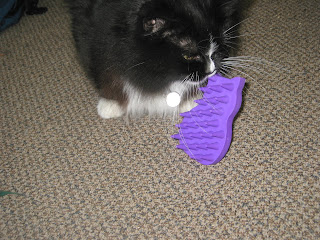 . Actually, it is the only cat brush he likes- since he is super furry the combs and slicker brush tend to tug on his fur and annoy him. He sheds like mad constantly. He gets brushed every day- not that you could necessarily tell by looking at my floor!- and it usually ends up being this brush + a comb to get out all the fur that the brush has loosened. Slicker brushes also seem to really bring out the static!  He is getting in more brown fur on his sides where he is usually black!  I threaten to shave him, but so far he isn't clumping. He looks pretty cute when he is shaved though! 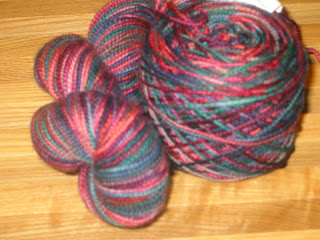 Still on the first skein of yarn for the project I am working on- you will hear more about it once I decide it will be a pattern I want to produce!
Email ThisBlogThis!Share to TwitterShare to FacebookShare to Pinterest