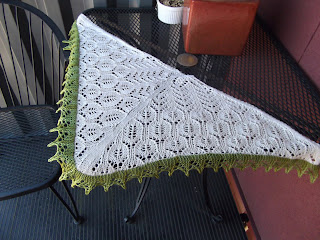 Finished the 3rd shawl for a shawl pattern I am making- it will be in 3 yarn weights (plus I wanted to see how much yarn the edging took up!). 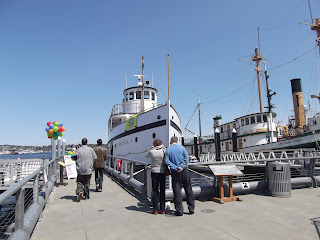 Amazing weather has *ahem* been somewhat lacking in Seattle of late- but at least it was sunny for the opening of the farmers market on the Virginia V. In South Lake Union/Westlake and in several other locations  they are starting famer's markets by boat (called appropriately, farmboat). It was a pretty small opening, I am hoping they will get more people and more produce soon, this is way too cool not to last. 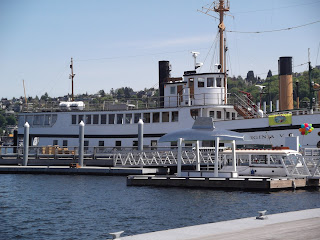 Boats with food and produce used to be a common site- though they do still exist. In some of the semi remote (reachable by boat and float plane but not always by car)  areas of Canada where we go on the boat it is common to see people selling fresh baked goods from their boats, and barges are converted to small shops and restaurants, often with docks lashed on so you can tie up your dinghy to them. 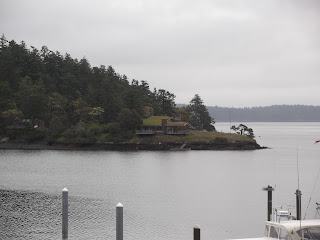 Not very remote, but we visited Friday Harbor on the boat last weekend. The weather wasn't expected to be great, so tourists were minimal. We dock on a private dock out a bit from the town, so it is quite quiet where we are- though not without people we knew- almost impossible not to find people you know (which is even more true, interestingly, when up further north where there aren't many people, since the same people are there every year, and many are part of the same yacht club). PS- there is a yarn shop in Friday Harbor! 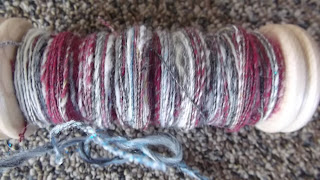 Spinning scraps- I save up all the "stuff" I heave left when I am done carding a colorway and save it up, then spin it all together. This is just a teeny skein... 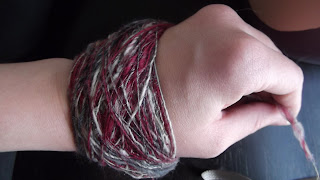 ...but enough that I should probably plied it differently. Especially since I ended up chatting on the phone in the middle of both winding the yarn on to my hand and spinning it- and once it is on your wrist you are kinda stuck! 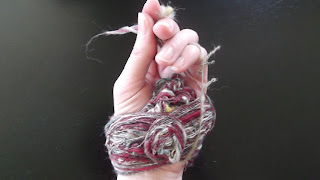 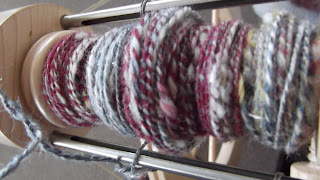 Hmm...a bit rustic looking- but I am hoping it will be semi stripey when I knit it up- this is just yarn to play with after all! 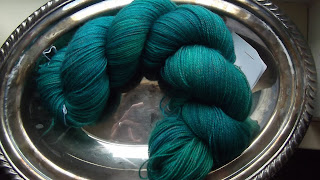 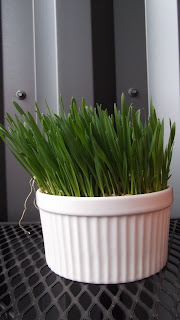 There is always catgrass (aka wheatgrass) in the house. My cat LOVES it. I tend to buy it more than grow it, but either way Joey cat goes to great lengths to get to the wheat grass- even if I were to say try and use it as decoration (let's just sat that didn't end well). 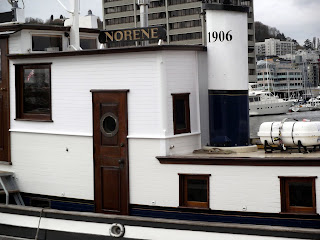 Ok- one last boat picture- this is the Norene, which is a wooden tug boat. It was docked at the docks in SLU park the other day. Yes, I know I am boat obsessed currently! I am looking forward to a summer filled with boating adventures.
Email ThisBlogThis!Share to TwitterShare to FacebookShare to Pinterest